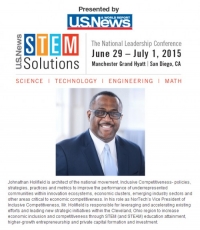 Posted by Black Innovation on Sunday, July 6, 2014 · Leave a Comment

When it comes to presidential election issues, Americans are fairly consistent. The economy is one of the top concerns of voters across the board.

So, when 250 of the world’s wealthiest and most powerful policymakers gathered recently to discuss how to transform the current system of capitalism in America you might’ve expected the entire nation to holds its collective breath, right? Well, no. The discussion was held across the Atlantic in England, presumably outside of earshot of the American press, which seems far less aware of what happens across the pond than their European counterparts with ears to the ground in America.

Even the presence of former president Bill Clinton on May 27 at the Inclusive Capitalism Conference, hosted by the mayor of London and organized by the Inclusive Capitalism Initiative and the Financial Times, didn’t register a peep on the radar of U.S. media. And despite the fact the collective worth of those assembled at the summit was more than double the $15T annual GDP of the United States, the response of those in America with a vested interest in economic inclusion was a collective yawn. But, that indifference is about to change.

The importance of the gathering in Europe to discuss changing the framework of American capitalism is that it represents a growing focus among America’s elite upon a looming crisis on the near horizon. As the combined population of Black and Latino Americans races toward a projected 42 percent by mid-century, there are furrowed brows of worry among America’s much ballyhooed 1 percent, who cannot fathom how the nation will sustain its global economic competitiveness with such a large swath of its citizenry producing a collective pittance of less than 4 percent GDP.

The problem is pace. American leaders have just recently started searching for answers to empowering historically disenfranchised peoples, most of who reside in low-income communities that remain disconnected from 21st century startup clusters and tech-innovation ecosystems that generate wealth all around them. The slothful movement of discussions and decision-making processes threaten any hope of developing and executing short- and long-term solutions. Meanwhile, the rocket-propelled pace of the Innovation Economy is generating exponential growth in the gap between the haves and have-nots.

When President Obama steps down from his legacy setting platform, which includes rescuing the nation (and possibly the world) from a near total collapse of the capitalist system of economics, the work of America’s incoming 45th president will undoubtedly focus on transforming capitalism from the archaic exclusive foundation upon which it was originally built, into a 21st century inclusive platform of economic competitiveness, a.k.a. “Inclusive Competitiveness.”

Bill Clinton’s presence at the Inclusive Capitalism Conference could be a foreshadowing of Hillary’s presumed presidential candidacy and the development of an economic vision for America that just might unite a deeply divided political landscape. There’s just one small problem with the Clintons crafting an economic platform of Inclusive Competitiveness; it already exists. Adoption would be the appropriate verb.

The Father of Inclusive Competitiveness

Reverberations of the coming change to America’s longstanding economic narrative are currently rippling through the state of Ohio, a perennial political battleground in the heartland of America, and extending outward across multiple states with growing interest throughout the landscape of historically black colleges and universities (HBCU). Leading this new movement of “Inclusive Competitiveness,” is its visionary architect, Johnathan Holifield, Esq., a former NFL runningback who knows a thing or two about competitiveness at the highest levels on and off the field. He seeks to improve the entrepreneurial performance of underrepresented groups (such as women and minorities) and regions (both urban and rural) in the Innovation Economy.

As the Vice President of Inclusive Competitiveness at NorTech in Cleveland, Holifield is leading a national movement that has planted seeds in regions across America from the White House to Silicon Valley. His overarching message is taken from Booker T. Washington, who advised disenfranchised communities to “cast down your buckets where you are.”

Holifield’s focus on modern-day “economic gardening” is a caution against placing all focus on importing talent from other states and countries. Development of local talent and retention of existing assets is a sustainable framework that is bolstered by talent imports. This focus on local-first is an investment in scaling up what’s working and shoring up areas where regions have historic economic holes. The absence of inclusive frameworks that recognize innovation occurring in regional blind spots has local leaders across America listening with growing intensity to the “Father of Inclusive Competitiveness.”

Holifield attributes the success of the budding movement of Inclusive Competitiveness to his “Trim Tab” methodology. He describes the rudder of a large ship as part of the steering mechanism that would be impossible to turn without an even smaller, highly leveraged piece called a “trim tab.” The “trim tab” allows the helmsman to steer the rudder, which can then turn the ship. Holifield looks to influence individuals who act as Trim Tabbers. They have influence on networks, institutions and organizations (rudder). Collectively, these assets and resources can be leveraged to turn large masses across America (ship).

Today, Holifield is Ohio’s trim tab. Through his influence, leaders across the state are taking a closer look at Inclusive Competitiveness. The Ohio Board of Regents formed a Subcommittee on Inclusive Competitiveness. His influence of the State Science Technology Institute has caused this association of leaders in the field of tech-based economic development to consider a deeper dive to find examples of Inclusive Competitiveness and highlight the vision as a 21st century economic imperative. Holifield was a major influence in the 2012 report, “Fusion of Inclusion,” produced by PolicyBridge and Cleveland State University, which collected data that revealed more than 20 percent of the northeast Ohio region (covering 21 counties) produced less than 2 percent of its gross regional product (GRP).  These large swaths of underperforming communities were concentrated among black and Latino Ohioans.

In the aftermath of losing its manufacturing economy, Ohio invested heavily in transforming regional economies into tech-based innovation clusters. Through its Ohio Third Frontier vision, billions of dollars have been invested in developing new infrastructure and ecosystems that did not exist 20 years ago. Now, Ohio is looking to its education sector, from K-12 to higher education, to prepare and equip all Ohioans to compete in its tech-based Innovation Economy.

As Holifield moves Ohio, it is Ohio that will move America.

The Atlanta Regional Economic Commission produced an outstanding futuristic economic plan. There’s just one missing element: Inclusive Competitiveness. If the term “Economic” were changed to “Inclusive,” that would catalyze a deep discussion on transforming Atlanta’s regional innovation ecosystem built upon a landscape of inclusive competitiveness.

Rumblings of the seismic shifts taking place in Ohio can be felt as far away as Silicon Valley, where the first-ever HBCU Innovation Summit was held at Stanford University. Produced by the UNCF (United Negro College Fund), the vision for the summit was introduced by Chad Womack, Ph.D., who serves as the National Director for STEM Education at the UNCF.

Dr. Carlton Brown, President of Clark Atlanta University, addresses attendees and panelists at the HBCU Innovation Summit during a session introducing the idea for an HBCU Innovation, Commercialization and Entrepreneurship (ICE) collaborative. The vision was received by attendees with overwhelming enthusiasm.

Dr. Womack is a co-founder of ScaleUp America, which promotes Holifield’s Inclusive Competitiveness vision as one of its three highest priorities (in addition to: changing the economic narrative across urban and rural America and connecting economically disconnected communities to local innovation ecosystems and opportunity). The extraordinary success of the HBCU Innovation Summit, which attracted delegations from 18 HBCU campuses has compelled the UNCF to schedule it again for the fall of this year.

Holifield points to STEAM education (science, technology, engineering, arts, math) as the entry point to two primary pipelines of productivity: A) high-wage, tech-based workforce and B) high-growth, tech-driven entrepreneurship. The latter of the two pipelines is where Holifield focuses most on bolstering the performance of underrepresented Ohioans.

Entrepreneurship is the American Dream that is dramatically pulling together polarized political factions on the issue of immigration, as the nation continues to benefit from the economic strength of immigrants who come to America to start businesses. But, Ohio, much like the nation at large, cannot solely rely upon immigration as a sustainable solution to regional economic competitiveness. Steve Case recently led a successful Rise of the Rest Bus Tour and Pitch Competition (#RiseofRest) that included a major pit stop in Cincinnati to emphasize the need to support local innovation ecosystems.

Ohio’s challenge is a microcosm of the challenge facing the nation at large. Nationally, all black-owned businesses produce less than 1 percent GDP, according to the latest Census data from 2007. Combined with all Latino-owned businesses, the total contribution to GDP is less than 3.5 percent. Yet, black and Latino entrepreneurs represent the fastest growth in entrepreneurship in America at 60 and 44 percent respectively. The challenge is connecting historically disconnected peoples to much-needed capital (financial, social, networking, policy) and educational resources.

As Holifield is fond of saying, “the unchanging physics that govern national economic competitiveness and prosperity demand greater contributions from many more Americans.”

That’s no easy task when the majority of students from low-income minority families are stuck in a system of “high-poverty” K-12 schools with a consistent record of abysmal academic achievement dating back to Jim Crow laws and institutional segregation. These schools remain so far behind the knowledge-based, tech-driven, globally competitive Innovation Economy that the problem isn’t within the student body; administrators and teachers are in desperate need of updating their knowledge of the nation’s fast-paced Innovation Economy and the curricula used to prepare students to successfully compete.

Given STEAM education is the entry point to being competitive in the Innovation Economy, and most black and Latino students are excluded from such curricula, it’s easy to understand why the prison industrial complex continues to thrive with a flowing school-to prison pipeline where black and Latino youth are overrepresented.

The good news is that Inclusive Competitiveness is an idea whose time has come. One of the top priorities of the next president  will likely be empowering, equipping and preparing all Americans to fully participate, perform and compete in a 21st century globally competitive Innovation Economy.

As the nation traditionally turns its attention to Ohio during every presidential election, it will be pleasantly surprised to see a state that isn’t waiting on America. It has already planted the seeds of economic inclusion and is currently cultivating a crop of new STEAM-educated high-growth entrepreneurs and developing a statewide vision of Inclusive Competitiveness, which is destined to become a national economic imperative.

For those steeped in presidential politics, watch for “Inclusive Competitiveness” to emerge. Whichever presidential candidate adopts it will present a unifying message of economic inclusion that will be tough to beat in 2016.