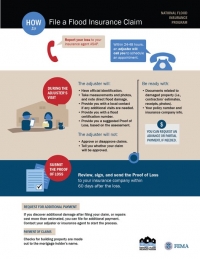 The state of Louisiana continues to deal with a significant level of flooding and one of the worst natural disasters in recent years. This morning, the President spoke with FEMA Administrator Craig Fugate, who traveled to Louisiana yesterday, to receive an update on the response to ongoing flooding in the state.  In the latest of a series of updates the President has been receiving since the weekend, Administrator Fugate briefed the President on the resources that have been provided to support the response and recovery, including FEMA Corps volunteers and federal assistance available to individuals who have been impacted.

The President directed Administrator Fugate to utilize all resources available to assist in the response and recovery and asked to be regularly briefed on the ongoing response. In addition, Department of Homeland Security Secretary Johnson will visit the impacted region on Thursday to review the ongoing response.

Last week when flooding began, President Obama spoke with Governor Edwards of Louisiana last Thursday and ordered federal aid last week to support state and local recovery efforts in the area affected by severe storms and flooding -- support that will continue as state and local officials in the affected areas address the impacts of the disaster.

According to the National Weather Service, significant river flooding will persist this week across portions of southern Louisiana. Major to record flooding will continue along portions of the Amite, Vermilion, Mermentau, and Calcasieu Rivers. Additional rain is possible in slow-moving, persistent thunderstorms, with the greatest threat across south central Texas and western Louisiana. Pockets of flash flooding may develop as a result of this additional rainfall.

So here's what you should know about the federal response in Lousiana and the resources that you or anyone you know who is impacted by flooding can use:

This federal assistance can include grants for temporary housing and home repairs, low-cost loans to cover uninsured property losses, and other programs to help individuals and business owners recover from the effects of the disaster.

Right now, FEMA, through its regional office in Denton, Texas, is highly engaged in response efforts in Louisiana as flooding continues across areas of the Gulf Coast. FEMA staff are on the ground in Louisiana as FEMA continues to coordinate closely with the Governor’s Office of Homeland Security and Emergency Preparedness. FEMA is also monitoring potential flooding in Texas and in states across the Gulf Coast.

Here's what FEMA is doing on the ground in Louisiana:

Louisiana residents impacted by flooding can directly apply for assistance online or by phone. Already, more than 70,000 people in Louisiana have registered for FEMA Individual Assistance.

If you are a resident or business owner who has sustained losses in the designated parishes, you can apply for assistance from FEMA by registering online at www.DisasterAssistance.gov or by calling 1-800-621-FEMA (3362) or 1-800-462-7585 (TTY) for the hearing and speech impaired. The numbers are toll-free, and will operate from 7am to 10pm (local time) seven days a week until further notice.

If you can safely return to your home, and have filed an insurance claim or applied for FEMA assistance:

Most importantly, don't put yourself at risk. Follow the instructions of local officials -- and if told to evacuate, do so immediately.

If you're in impacted parishes, you can also download FEMA's app to your smartphone so you can locate and get directions to open shelters across the state, and receive weather alerts from the National Weather Service for up to five difference locations anywhere in the United States.

And finally, make sure you take note and share these important tips on how you can stay safe in the event of flooding near you.

Learn more about what you can do to prepare for, respond to, and address the impacts of flooding in your neighborhood here: Ready.gov