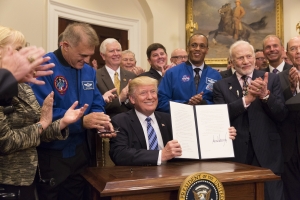 President George H.W. Bush established the National Space Council in 1989. The Council was tasked with advising and assisting the President regarding national space policy and strategy. The Council ceased operation in 1993. This Executive Order revives the Council and will reinvigorate America’s role as a leader in space, strengthen America’s economy, and advance the security of the American people.

There were a lot of promises made in selling Obamacare—and it seems like just about all of them have been broken.

They told us if you liked your doctor, you could keep your doctor . . . and yet so many Americans have lost access to their doctors under new Obamacare insurance plans. 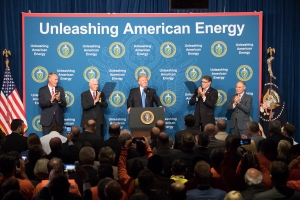 We will bring new opportunity to the heartland, new prosperity to our inner cities, and new infrastructure all across our nation. When it comes to the future of America’s energy needs, we will find it, we will dream it, and we will build it.
President Donald J. Trump 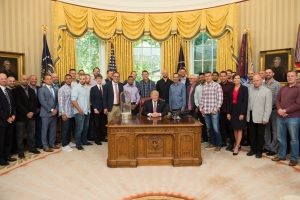 On Wednesday, President Donald J. Trump and Vice President Mike Pence welcomed the 2016 World Series Champions, the Chicago Cubs, to the White House. The team brought the Commissioner’s Trophy and participated in a meet and greet with the President.

Before bringing the team in to the Oval Office, President Trump made some short remarks in the Roosevelt Room, where he congratulated them on their historic World Series victory last fall.

The team gifted President Trump with a customized championship “45” jersey, as well as a “45” scoreboard panel. 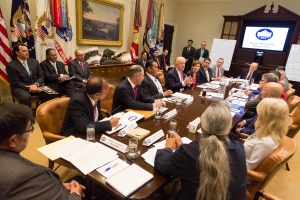 On Wednesday, President Donald J. Trump hosted a tribal, State, and local energy roundtable at the White House. He was joined by Governors Paul LePage, Kim Reynolds, Pete Ricketts, and Bill Walker, along with State and tribal leaders from around our great country.

President Trump stated his Administration’s intent to roll back harmful regulations that prevent State, local, and tribal communities from accessing vital energy resources. These regulations hinder economic growth that would create jobs and could be used to fund roads, schools, and infrastructure.

It is President Trump’s hope that the roundtable will allow for more cooperation between local governments and the Trump Administration in order to unleash America’s energy potential.

The President stated his intent to “usher in a golden age of American energy dominance.” 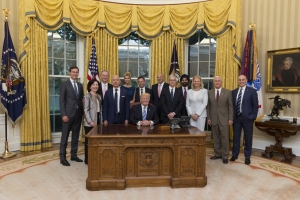 This week was Technology Week at the White House, and the Trump Administration held events focusing on modernizing government technology and stimulating the technology sector.

On Monday, the White House invited major tech leaders and university presidents for the inaugural summit of the American Technology Council. Hosted by the White House's Office of American Innovation, the event consisted of multiple breakout sessions to discuss ways to modernize the government by retiring out-of-date legacy systems and increasing the use of shared services. 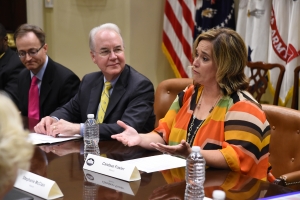 On Wednesday, Health and Human Services Secretary Tom Price, M.D., hosted a listening session at the White House with Administrator of the Centers for Medicare and Medicaid Services Seema Verma to hear from individuals who are facing a lack of choice in healthcare plans due to insurers pulling out of Obamacare marketplaces.

Yesterday, President Donald J. Trump visited Kirkwood Community College in Cedar Rapids, Iowa to address his efforts to foster agriculture innovation. He spoke about the value of farming to the Nation’s economy and ensured the Administration would continuously embrace the challenge to rebuild rural America.

The previous Administration sold Obamacare to the American people through a series of empty promises. Premiums were supposed to drop, but instead they have soared by nearly $3,000. Choices were supposed to multiply, but instead they disappeared, leaving one third of American counties with only one insurer in 2017. The public was supposed to learn to love Obamacare, but 6.5 million Americans chose to pay $3 billion in penalties to the IRS instead of buying health insurance last year.