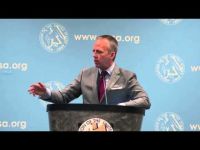 Who Is Under Secretary Brad Carson

Before joining the Obama Administration, Mr. Carson held a variety of public and private positions. During the Clinton Administration, Mr. Carson was selected as a White House Fellow and served as Special Assistant to the Secretary of Defense. After practicing commercial law at Crowe & Dunlevy, P.C., the largest law firm in the state of Oklahoma, Mr. Carson entered politics. In 2000, Mr. Carson was elected to the United States House of Representatives. He served in the U.S. Congress from 2001-2005, representing the 2nd Congressional District of Oklahoma. Upon leaving office, Mr. Carson was appointed as a fellow at Harvard University’s Kennedy School of Government, and he later served as Chief Executive Officer of Cherokee Nation Businesses, one of the largest businesses in the state of Oklahoma.   From December 2008 until December 2009, Mr. Carson served on active military duty, deploying to Iraq in support of Operation IRAQI FREEDOM. As a United States Navy intelligence officer, Mr. Carson embedded with the United States Army’s 84th Explosive Ordnance Disposal Battalion. He worked with Explosive Ordnance Disposal teams at seven bases investigating bomb sites, caches, smuggling routes and other activities related to improvised explosive devices.  From January 2009 until January 2012, Mr. Carson served as a professor of business law at the University of Tulsa, where he held joint appointments in the College of Law and College of Business and served as Director of the National Energy Policy Institute.    Mr. Carson holds a bachelor’s degree in history from Baylor University, Phi Beta Kappa. He received a bachelor’s and master’s degree in Politics, Philosophy and Economics from the University of Oxford, where he was a Rhodes Scholar.  Mr. Carson also holds a J.D. from the University of Oklahoma.

our story on the Education of War reflects momentarily for purpose of demonstration,  the resume of Under Secretary Carson which does well to confirm that an education becomes pertinent to the pathway of ones professional success.  Noted in today’s video, OGTV quotes Carson’s in his speech discussing the needs of today’s Army.   Six minutes into his speech, the Under Secretary discusses the challenges the Army is currently grappling with:  Carson asks the question-Should we accept in the Army's inefficiencies, and the waste in Army recruiting process?  "Recruiting is one of the most important jobs in the Army, and is a very difficult task. Each year, the Army assesses “60,000-80,000 men and women-depending on the needs of the force. These young men and women must be special people. They must be resilient and fit, they must be soldiers of character,  they must be competent, agile, committed, and adaptive. They must be capable of forming trusted teams to form all the while representing the diversity of America". "A tall order.  Meeting these requirements have proven to be no mean feat.” according to Under Secretary Carson.

Shifting from the U.S. Army, and just one of the challenges facing the US Army presented by Under Secretary Carson, we now turn your attention to our nation’s Historically Black post secondary institutions that have produced more African American engineers, lawyers and doctors than any other Universities in America,and where we share Johnny Taylor, CEO of the Thurgood Marshall Foundation’s take on addressing a severe and ever present challenge facing HBCU’s; HBCU relevancy.   OGTV has found in many regards, the challenges that our US Army faces are some of the same challenges faced by Historically Black Colleges and Universities.  This profound assessment and comparison we realize will create debate and even potentially ardent controversy, but at best, we trust that this bold compare and contrast stimulates deeper analysis into both institutions around these challenges.    In as much we will continue this segment with Part II  of our story, "The Education of War".

By Johnny Taylor
Not a week goes by where those of us in the HBCU community are confronted with the question of the continued relevancy of HBCUs. We’ve heard them all.  Do we still need HBCUs in a post racial America?  Isn’t it reverse discrimination to have race-based colleges like HBCUs?  Does the education provided at HBCUs compete in quality and rigor to the non HBCUs?
All too often we find ourselves “defending” our existence and relevancy with some version of the following two-steps: first, we highlight our most famous alums:  Justice Thurgood Marshall (Lincoln University and Howard University Law School); civil rights leaders Martin Luther King Jr. (Morehouse) HARPO CEO and media proprietor Oprah Winfrey (Tennessee State University) and Black Enterprise publisher Earl G. Graves (Morgan State University).
Then, we roll out the stats that describe how many African- Americans are HBCU graduates: 22 percent of bachelor’s degree holders; 40 percent of members of Congress; 12.5 percent of CEOs; 40 percent of engineers; 50 percent of professors at non-HBCUs; 50 percent of lawyers; and 80 percent of judges. Without a doubt, the data are clear:  HBCUs are iconic institutions that will forever be historically significant and relevant.  Different questions are being asked now, though: Are HBCUs currently necessary? Are they relevant today?
The truth of the matter is that a very compelling case can be made that HBCUs are actually more relevant and necessary today.  As America “browns and grays, HBCUs are uniquely positioned to educate an America where people of color will need to fill the corporate boardrooms, government offices, judicial chambers, k-12 classrooms and hospital operating rooms.  Our past success educating people of color-manyof whom entered college with academic deficiencies resulting from poor secondary school preparation-is a strong indication of our ability to deliver positive outcomes; the question is how we will transform ourselves to deliver career-ready and globally prepared talent in a 21st century post secondary environment that is being up-ended and disrupted at every turn.
I met with a senior U.S. government executive not long ago who put it best:  “He looked at me and my other (White) colleagues during a meeting the other day and said:  There are not enough of our children to replace us.  We must find a way to develop minority students if America is to remain the world leader.  He came to my office in an effort to determine how the federal government could utilize the HBCU pipeline to solve a real dilemma-one resulting from the undeniable fact that racial and ethnic minorities now surpass Whites as the largest number of American children under 5 years old.
This wasn’t a discussion about turning to HBCUs because it was the right and moral thing to do.  There was no mention of correcting the lingering impact of slavery and the failure to make reparations.  No, the discussion was one about necessity.  America is realizing HBCU survival is a matter of national security; if we can’t find America talent, we will have to import it-and that comes with all sorts of complexities, expenses and potentially negative consequences.  The strongest for HBCU relevancy today, therefore, lies in the fact that the HBCU community is home to more than 350,000 future workers and leaders.  As opposed to begging for donations to help our historically underfunded institutions survive, let’s make the case for the investments to make them thrive.   We must speak in terms of return on investment (ROI) when we respond to the question of HBCU relevancy today.  For example, if an employer invests just $20,000.00 per year in a student attending a publicly supported TMCF-member school, we will deliver a talented, confident, and productive human resources-a simple value proposition that we know resonates.
Earlier this year, the Thurgood Marshall College Fund pitched this idea to a company we all know well, Apple.  We asked Apple executives to invest in HBCU faculty and students in return for access to a robust and highly talented pipeline of future engineers commit and entrepreneurs. In a March 10, 2015, Fortune magazine story, Apple announced it like this “thoughtful” approach and would commit tens of millions of dollars to build this pipeline. Today, our HBCU community has an opportunity to prove to the world that we are not just historically significant; we are currently relevant.  HBCUs have a unique opportunity to change the conversation about why they need to exist and are a really smart “investment” for America.

Johnny C. Taylor Jr. is president and CEO of the Thurgood Marshall College Fund (TMCF), a nonprofit advocacy organization named for the U.S. Supreme Court’s first African-American justice. Founded in 1987, TMCF supports and represents nearly 300,000 students attending its 47 member schools that include publicly supported historically Black colleges and universities (HBCUs), medical schools and law schools. OGTV thanks both TMCF and to Under Secretary Brad Carson, and the ILW for the contribution to this first series of the "Education of War".