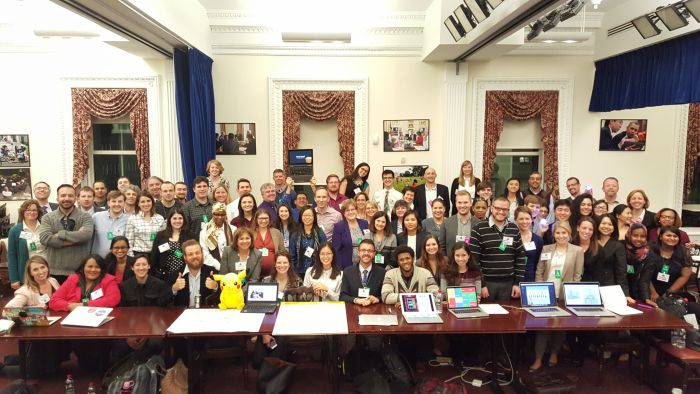 OGTV had a number of news story options that we could have elected to report on this week. Divisive and disturbing as news is and can be, we elected to ensure that we gave appropriate attention to the nation’s priority to increase the number of students and teachers who engage in computer science an appropriate light of day as our OGTV Feature story.

We encourage you to get caught up, catch our social media blitz as we “echo” the national calling for a computer science competent country. As Big Data becomes priority to all facets of our lives, and as OGTV gears up for 2016’s campaign to Move STEM In Communities of Color, we recognize that there are prevailing misconceptions that people of color do not achieve success in these fields, and the lack of visibility of role models contribute to this dilemma. Our commitment is to change the game, and not just the equation. Keith Moore, OGTV Founder. Keep it Locked @ www.opengovtv.com

Each year we recognize Computer Science Education Week (CS Ed Week) around the December birthday of U.S. Navy Rear Admiral Grace Hopper, a pioneer of computing. Last year, President Obama became the first President to write computer code as a part of Hour of Code at the White House and the Administration announced a host of public and private commitments to expand access to computer science education in K-12 schools.

This year, to kick-off the week, the White House hosted its first everCS Tech Jam, bringing together educators, students, and developers to generate new ways to bring fun and engaging computer science experiences, coding, and computational thinking into K-6 classrooms.

Throughout the remainder of the week, White House Officials and Federal agency leadership will be hosting and speaking at a number of community-based computer science events around the Nation:

These events are just a few of the many community-based celebrations that will take place during this seventh CS Ed Week.

After seven years, it’s also important to reflect on our progress as a Nation in expanding access to computer science education.

While much progress has been made, there still is a need to better engage all of our learners. As Domestic Policy Director, Cecelia Muñoz, and U.S. CTO, Megan Smith noted in a previous post, in 2015, girls represented only 22 percent and underrepresented minorities only 13 percent of the approximately 50,000 students who took the Advanced Placement Computer Science A (AP-CS A) exam nationally.

We, as a nation, can and must do better!

So, as you celebrate CS Ed Week, submit your ideas about new commitments and remarkable CS champions!

And, if you want to use Computer Science Education Week to bring computer science to your community, here are several ideas.

It is an exciting and impactful time for computer science education! We hope you’ll join us this week and beyond by getting hands-on with fun and engaging computing activities and bringing computer science and computational thinking to students in your community!

Megan Smith is the U.S. Chief Technology Officer in the Office of Science Technology and Policy at the White House

Russell Shilling is the Executive Director of STEM at the U.S. Department of Education