In this week’s address, President Obama highlighted the actions his administration is taking to spur competition in the airline industry, protect consumers and arm them with the information they need to make informed decisions, following the President’s call to action in April. Building on the progress we’ve made so far, this week’s actions include a proposed requirement for airlines to reimburse luggage fees when bags are delayed; requiring airlines to report on the probability that your luggage could be lost; providing protections for travelers with disabilities; and requiring additional transparency and fairness in online ticket platforms.

The President highlighted these steps as another example of how government can be a force for good – ensuring that everyday Americans get a fair shake in our economy and have a voice in the conversation. That’s what these actions are about – taking steps, big and small, to better the lives of everyday Americans. 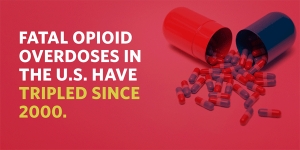 Nearly 130 people in the U.S. die every day from a drug overdose, and most of those involve prescription opioids or heroin. The majority of people of people who misuse prescription drugs report that they obtained the drugs from family or friends.

But this weekend you can do something about it and help protect your family and friends.

Today, President Obama heads to Miami, Florida to talk about the progress we've made for Americans across the country since the Affordable Care Act became the law of the land over six years ago. To help celebrate this landmark legislation, we're releasing never-before-seen footage from the day that the Affordable Care Act was passed and the day it was signed into law. 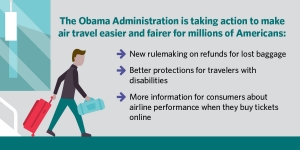 This year, more than 700 million passengers are expected to board 9 million domestic airline flights in America. The sheer volume of people, flights, and miles underscores how fundamental air travel is -- not just to the American economy, but to the lives of so many people across the country.

Today, President Obama and First Lady Michelle Obama will host their 14th and final Official State Visit and State Dinner in honor of Prime Minister Renzi of Italy, and his wife Mrs. Agnese Landini.  As Chief Curator at the White House since 2002, my job is to oversee the art and décor in the White House, which plays an important role in welcoming heads of state from across the globe. 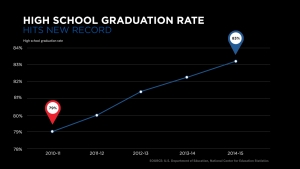 Watch President Obama speak in Washington, D.C. at 11:25 am ET

In this week’s address, President Obama highlighted the White House Frontiers Conference, where many of America’s leading innovators came together to discuss how we can empower people through science, technology, and innovation to lead our communities, our country, and our world in the future. The President said the advances we’ve made as a nation demonstrate how investing in science and technology can help develop new jobs and industries, and new discoveries that improve lives – and that innovation is in our nation’s DNA. 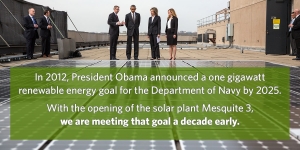 Addressing climate change remains a top priority for President Obama. The Administration is committed to take action on climate change by continuing to promote the transition to clean energy sources and create good paying jobs. As the President made clear in his Climate Action Plan, he firmly believes that the federal government should lead by example in improving energy efficiency and cutting harmful carbon pollution. 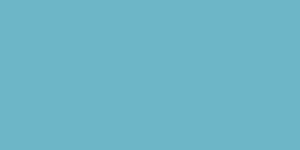 On August 26th, President Obama publicly responded to a Facebook message sent to him by a citizen—a first for any president in history. Since then, he has received over one and a half million Facebook messages, sent from people based all around the world.

While receiving messages from the public isn’t a recent phenomenon—every day, the White House receives thousands of phone calls, physical letters, and submissions through our online contact form—being able to contact the President through Facebook has never been possible before.